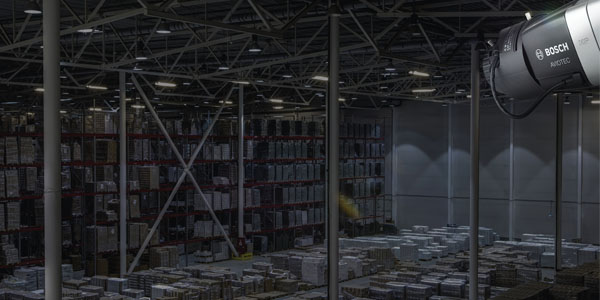 With a new version of its video-based fire detection system, AVIOTEC IP starlight 8000, Bosch Building Technologies enables the early detection of fires with cameras, even in low light conditions. Both flames and smoke are reliably detected down to an ambient lighting level of 2 lux. To achieve this, Bosch has extended its video analytics in the camera with the use of artificial intelligence, which processes the results of more than 20 algorithms and makes an alarm decision.

The new version offers a significantly improved sensitivity without compromising the solution’s robustness against false alarms. The new firmware version 7.61 is suitable for application in areas with very low light levels such as warehouses and production plants at night. In case of changing environmental conditions, the sensitivity can be adapted using programmable schedules. For example, it is possible to optimise against false alarms during daytime operations, while empty buildings, where fast detection is required, benefit from higher sensitivity at night.

As the solution works reliably with minimal ambient light, it saves costs relating to the use of the lighting. Furthermore, it significantly reduces the threat for applications with high fire risks. For example, in multi-story car parks, AVIOTEC IP starlight 8000 delivers reliable early detection to protect vehicles and electrical charging stations. In all
environments, the installed cameras can be used simultaneously for fire detection and video surveillance, which further reduces installation and operating costs.