Next Generation PoE: a Superior Option? 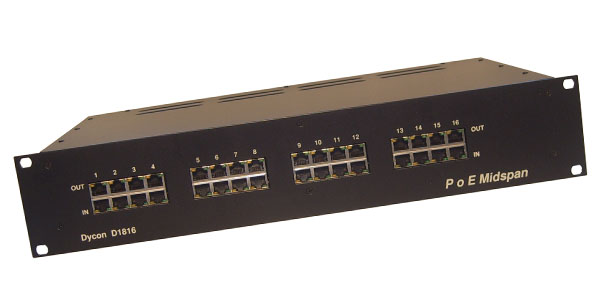 Power over Ethernet (PoE) underlines how smart systems based on networked platforms are enjoying economies created by the IT and consumer industries. PoE offers a simple and fast installation and makes system reconfigurations an affordable and easy task. It transcends technologies and is beneficial for any type of smart or integrated solution. PoE is being further developed to meet the demands of IoT and converged solutions.

The benefits of power over Ethernet (PoE) cannot be overstated. Any technology which reduces costs, enhances system implementation, simplifies upgrades and expansions and meets end user demand has to be acknowledged as offering added value, and PoE does all of this with ease. Other industries and commercial sectors have fully embraced PoE, recognising what it offers in terms of system design and performance enhancement. The security sector has benefited from the technology too, and today it is unusual to find network-based edge devices that do not support the use of PoE in one or more of its many forms.

In the grand scheme of things, for those companies and organisations developing PoE-enabled devices, the smart systems markets are not seen as exceptions. If anything, smart cities, intelligent buildings and edge-based data collection and processing has put the sector on the same page as the tech giants seeking the next big multi-million pound concept. The developments that are borne from other sectors are freely available to the entire security solutions industry, and therefore should be used where they add efficiencies.

With the advent of the Internet of Things (IoT) in all its various guises, the mainstream technology industry has a focus on integration and interoperability. Those who will ‘win’ in this competitive market are the companies that deliver the simplest options which tick the right performance boxes for customers. Alongside that, ease of installation, a reduction in cabling and uniformity of implementation are all significant issues for the majority of system integrators.

Many people share data between PCs and laptops, tablets, smartphones, wearable devices, televisions, media servers, etc.. All of these devices are on the network, and it therefore makes sense if all can enjoy the benefits of power over Ethernet.

Whilst many of the devices aimed at the IoT and smart systems markets are mobile, a number of them are more traditional hardware, and as such they suffer from the limitation of having to be hard-wired. This includes the supply of power. Indeed, even mobile devices will need to be connected to charging stations. It makes sense if these static devices could be powered by PoE. For example, TVs and PCs often include LAN connections, so why not power them across the network infrastructure?

Such an approach meets many customer demands, and as a result the IT industry has been working towards advanced versions of PoE that deliver more power for such applications.

Given that this approach makes sense with regard to business and consumer products, it also offers much to those providing security solutions and smart systems. Using PoE to power NVRs, monitors, servers, storage devices, workstations, control panels, consoles, etc., delivers a high degree of flexibility in system design, and also allows a more cost-effective implementation. When it comes to upgrades and/or expansions, the benefits stack up even higher.

Much of the labour time associated with any system installation is taken up with cabling. Subsequently, any reduction in the amount of cabling is usually welcomed with opened arms by integrators.

One part of the installation process which increases costs is the addition of fused spurs for power supplies at all relevant locations. While many integrators have trained staff to allow the fitting of spurs, there are still a number who have to subcontract the work out to an electrician. This adds costs and time to an installation.

Of course, those who work with network platform-based systems enjoy two significant benefits: the reduction of cabling and the elimination of a need for dedicated fused spurs. This is in addition to the overall flexibility offered by networked solutions in general.

In recent times, the options for PoE have increased, and with infrastructure providers developing new products aimed at other industries, once more the security solutions market can benefit.

Power over Ethernet comes in different forms, and when selecting devices to create system infrastructure it’s important to understand the variants and what they can offer. There are three standards: IEEE 802.3af, IEEE 802.3at and IEEE 802.3bt. These give rise to four options in the world of PoE. 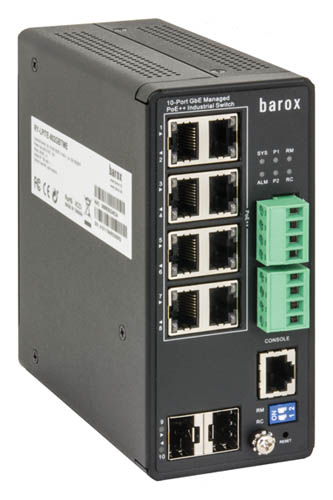 The basic PoE technology is based on IEEE 802.3af. Commonly referred to as PoE or two-pair PoE, this low power option delivers 15.4W DC power to each PoE port, supporting up to 12.95W for each connected device. PoE is generally used for static cameras, locks, door control devices and basic communication products. If an infrastructure device merely states PoE delivery, this is most likely what it will refer to.

Where higher levels of power are required, it is becoming increasingly common to find cost-effective devices that support the IEEE 802.3at standard. Commonly referred to as PoE+ or PoE Plus, it supports 30W DC power to each PoE port, delivering up to 25.5W for each connected device. PoE+ is commonly used for PTZ cameras, units with longer range illuminators or heaters, as well as many biometric or multi-door products and advanced communications options. It is worth noting that PoE+ is backwards compatible with PoE devices.

Whilst PoE and PoE+ are common in the security market, there are two additional options that deliver higher levels of power. Sometimes referred to as next generation PoE, these solutions comply with the IEEE 802.3bt standard.

The first is referred to as PoE++, four pair PoE, 4P PoE or UPoE. It provides 60W DC power to each PoE port, delivering up to 51W of power to each connected device. These devices have been designed to meet the needs or more advanced video applications including two-way streaming, smart building control and advanced building management systems.

Higher power PoE also has its basis in the IEEE 802.3bt standard, and is intended to meet the power requirements of more advanced network devices. It provides up to 100W DC power to each port, delivering up to 71W of power for each connected device. The goal is to power network nodes such as AV displays, servers, televisions, storage and streaming devices, household appliances and other smart products. Of course, for security systems this could include storage devices, analytics servers, NVRs, workstations, management consoles, etc..

Power over Ethernet is very much an essential feature of many low power network-based security devices. As such, it tends to be used at the edge, where the supply of additional power outlets might be a problem. Indeed, where edge-based equipment that utilises network connectivity doesn’t include PoE, it is often considered as less appealing and typically avoided by forward-think integrators and their customers.

Of course, in installations where most of the equipment is located in a central location, the concept of PoE for more power-hungry system elements might have minimal appeal. However, this negates the benefits that can be achieved through the design of a more distributed system.

For example, the positives of edge-based recording are well established, and as bandwidth becomes an increasingly valuable resource, the approach of recording locally will increase in significance. If the edge recording device is supporting a number of cameras, it might be a simple task to locate it within the proximity of a power outlet. However, should the topology of that ‘branch’ of the network change, such as for the addition of extra devices, or to cover temporary needs, this might necessitate the installation of additional fused spurs. With one of the next generation PoE types, such changes are easily accommodated without the burden of significant additional costs.

However, the biggest driver for the use of next generation PoE will be demand from customers. As other systems and industry sectors adopt the new types of PoE delivery, and as the commercial world makes increased use of the technology, so customer expectations will change. When being offered a ‘high tech’ or ‘smart’ solution, there will increasingly be a presumption that next generation PoE will be used.

This may not seem to be too important today, but consider how such expectations have driven the adoption of other technologies such as HD and 4K UHD video, cloud services, mobile apps and SaaS, and the importance of meeting expectations cannot be ignored.

The majority of integrators who have already widely adopted PoE technology will argue that it is a significant benefit when designing and implementing security, safety and smart systems. Some of the largest systems integrators have reported they simply won’t consider devices which don’t offer PoE, because of the flexibility and the economies that the technology offers. Often the additional cost of traditional power supplies and fused spurs simply does not make sense if a tender for a contract is to be competitive.

Additionally, the majority of end users (including many who have experience in the IT sector) state they ‘expect’ it to be a technology deployed in their networked solutions, regardless of whether the system is an IT or security application. More than being on an end user’s ‘wish-list’, PoE is often a ‘must have’ system element, predominantly because of the cost savings which the technology offers.

PoE can deliver many benefits include savings in terms of cost and other resources, and can also minimise downtime and disruption for businesses and organisations seeking system upgrades and expansions. Currently, in many security and smart applications, PoE is deployed predominantly to power edge devices. However, the new developments make this a somewhat limited approach.

The pace of adoption in the security and safety markets will be slower than in the consumer and IT markets. That said, some security-focused infrastructure products are already available offering PoE++ support. As mainstream use of the next generation PoE options increases, security manufacturers will be forced to adopt the new options. Demand from integrators will also help accelerate the introduction.

Next generation PoE will enhance benefits and will certainly add more value to the security and smart solutions which use it.

Tags:
Previous Article
HID Global launches Signo range
Next Article
How video can help with social distancing – and offer a way out of lockdown

PoE++ – the Evolution of PoE