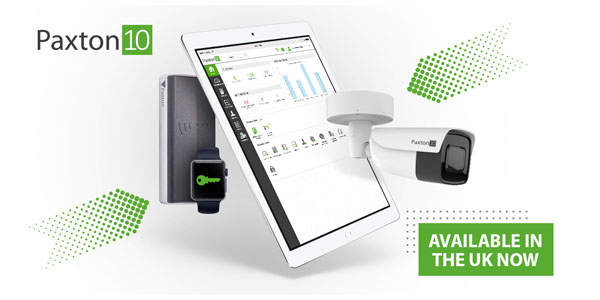 Paxton10 has been developed and manufactured in the UK meticulously over time. It has been engineered to meet the growing need for access control and video to be managed via a single, straightforward platform. In the results of a recent Paxton survey, out of over 1400 sites fitted with Net2 access control, 936 had video surveillance, yet only 62 of these sites integrated the two.

Paxton’s Chief Sales Officer, Gareth O’Hara, said, ‘Using the latest technology to combine access events and video footage in one place, Paxton10 simplifies site management, overall security and offers customers something they’ve never seen before. We believe it is a game-changing system. From the feedback we have received so far, our installers have told us they are very excited about the direction we were going in with Paxton10, particularly with the new technology. People really understand the need for a unified platform in the mid-market.’

The product launch follows a long period of in-depth research and engagement with installers to identify the features they felt most beneficial to them and their end users. The first version was originally released in September 2015, when it was fitted across a range of different sites with various needs. Throughout this time the system was rigorously tested before its wider launch to global markets. This followed the Paxton10 roadshow where the system was showcased to hundreds of installers at nine venues across the UK, receiving very positive feedback

Craig Lovett, Prestige Security Solutions, joined Paxton for the roadshows, saying, ‘I’ll most definitely recommend Paxton10. Like with all Paxton products, the user interface is simple, it is plug-and-play and it looks good.’

As well as working with third party cameras, Paxton10 saw the industry debut of Paxton’s exclusive range of Paxton10 security cameras, making the combined installation of access control and video management simple and cost effective. Paxton10 uses Bluetooth technology with smart credentials, allowing users to open a door from their phone or watch. This feature is included free of charge to an unlimited number of users.

What is in Paxton10

Paxton is currently running a series of Paxton10 introductory 30-minute webinars. They are completely free and designed to support installers with new product information, giving them something new to offer their customers.

Alongside the Paxton10 webinars, Paxton is also inviting installers to sign up for virtual bespoke Paxton10 Installer Training. The in-depth course will cover everything needed to install, configure and maintain a Paxton10 system.