In an age of smart technology, many manufacturers are focused on the delivery of ‘intelligent’ features and functions. Whilst this is often a benefit for integrators, installers and end users alike, the reality – which must be remembered – is it is possible for a feature to be smart without being useful. A definition needs to be understood between functionality being clever and being useful. Too often, these characteristics get confused and the end user declines to invest in new technologies. VideoManager 3D VMS from IPS delivers smart functionality that is also useful for the customer, enhancing security and increasing the customer’s return on investment.

If you consider any of the smart technologies which have become a part of our everyday lives in recent years, whether in the commercial or consumer worlds, they all have one thing in common: their acceptance has been driven by the fact they make things easier to do. Technologies which are clever for the sake of being clever see minimal adoption and soon fall by the wayside.

This is clearly evident in the business environment. Emerging technologies rarely as adopted by the masses until a credible business case exists for their use. Once such a case is made, their acceptance happens quickly and without resistance. Whenever a manufacturer decries the lack of acceptance for a product or system, claiming that people simply don’t ‘get’ it, the truth is it inevitably doesn’t make everyday tasks simpler and/or quicker.

If a business case exists which proves increased or enhanced performance, the fact is acceptance by the mass market will swiftly follow.

This is true of many technologies, and is also the case in the security sector. Recent changes to processing capabilities and capacities have heralded an age of smart devices and systems, and these new technologies can only be seen as a benefit for the industry. However, this does not mean leveraging smart technology is a panacea for security implementations.

When building a business use-case for technology, the headline features – the ones that excite end users the most – are functions that make the use of the system more efficient. This can be as a result of making processes simpler or faster, saving resources and allowing a better degree of interaction.

IPS has, for decades, dedicated itself to creating workable and efficient video surveillance solutions.

When it created its VideoManager 3D VMS technology, the issues relating to operator efficiency were at the forefront of the company’s thinking. By focusing on a known problem for video surveillance users, they created a solution which delivered a provable and desirable use-case.

One of the biggest challenges with video surveillance systems is the sheer volume of data that is captured. Every minute of every day, cameras capture real-time footage. Consider systems with hundreds or even thousands of cameras, and the scale of the issue becomes evident.

Flexible system design makes it possible for geographically dispersed sites to be linked to one central control centre. Alternatively, control centres in various countries might take control of all other systems during their working day. This approach is a benefit which can be realised due to developments in flexible communications, but does place a significant workload on security system operators.

With multiple cameras from multiple sites, it is unrealistic to expect every system operator to be familiar with the layout of each site, or to have an encyclopedic knowledge of every camera number, along with pre-set positions. In the event of incident, the pressure on individuals is increased, and even a momentary lapse in concentration can lead to an incident being missed, or an individual who is being tracked becoming ‘lost’ in the many video streams.

Studies and research have shown that information overload is a significant issue when individuals have to retain their focus and concentrate on the data they are assessing. This is specifically relevant when it comes to video surveillance, as much of the streamed video contains nothing of interest. This high level of data which requires no action can actually create a lack of focus, meaning when an incident occurs, operators are at a disadvantage straight away.

This negatively impacts on an end user’s return on investment in two ways. Firstly, the personnel they have employed are not as efficient as they could be, often through no fault of their own. The very nature of what they are being asked to do creates problems. This results in a less effective security team.

Secondly, the user has made an investment in surveillance technology to assist the security team, and whilst the technology offers a wide range of benefits, the amount of data being delivered to operators can be counterproductive.

IPS has addressed these issues with VideoManager 3D VMS, offering a smart video solution that ensures operators are more efficient, and the video surveillance solution operates in a proactive way.

VideoManager VMS makes use of 3D technology, which enhances the management suite’s operational feature-set, delivering added value and significant benefits for end users which in turn increases the return on investment. The software’s 3D technology automates tracking and camera handover, meaning operators can follow suspects without a need to manually control PTZ-enabled cameras. The cameras automatically use IVA to track suspects, and if the target moves from one camera’s protected area to another, the system automatically hands over to the adjacent camera. 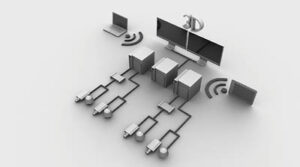 VideoManager includes motion detection and sabotage detection, and additional IPS intelligent video analytics can be added via licence upgrades to perform a host of tracking and control duties.

Visualisation of sites is achieved via site plans and maps, and control can either be manually deployed or automated via analytics triggers. These can include integrated IVA options or other alarms, linked through system actions, and this ensures that operators are assisted when following events, with the smart technology ensuring suspects are not lost.

The IPS 3D technology makes use of geo-referencing, enabling the VMS to be ‘aware’ of the exact location of cameras and other devices, and to correlate that data with absolute positioning devices and smart system maps.

To provide seamless support for operators, ensuring they remain efficient throughout an incident, IPS 3D technology works on a system level rather than at a camera level. By adding intelligence to the relationships between cameras, edge devices and the graphical user interface, it provides real benefits for businesses and organisations.

This functionality adds value for the user and makes the operator’s task simpler. When an incident occurs, even though the operator may have numerous other tasks to perform, the system can either simplify tracking suspects, or automate the process so human error is not a risk factor.

IPS 3D technology negates the threat of operator error, it increases the efficiency of security teams, it eliminates confusion over camera numbers and pre-set codes, and it ensures the video surveillance system operates at an optimal level when it counts most: during alarm events and incidents.

This elevates the end user’s return on investment, as staff perform to a higher level, and the system aids personnel when they need support the most.

IPS VideoManager’s 3D technology uses artifical intelligence to deliver smart benefits which provide an increased return on investment for end users who are serious about security. The technology increases the efficiency of both staff and systems, and also solves an everyday issue which many video surveillance users face in a smart and innovative way.