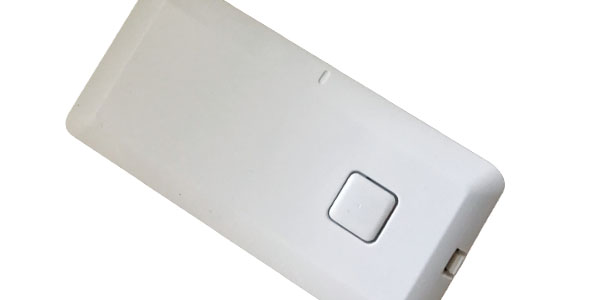 When Texecom launched the Premier Elite Micro Contact-W, the miniature form factor and the device’s low profile offered a wireless contact which could be virtually hidden in most window and door frames. This made it suitable for many applications and allowed its use as a trigger in smart systems too. The range is now completed by the Premier Elite Micro Shock-W, which allows a high level of flexibility when mounting shock sensors.

Traditionally, magnetic contacts and shock sensors are a staple in intruder alarm applications, offering protection for doors and windows at a site. While essential when delivering security to a building, it’s hard to get too excited by the products. In many installations, shocks and contacts can be problematic. They create issues with wiring, and even the advent of wireless devices doesn’t get rid of the problem that few end users want large detectors on every window or door.

Where the Premier Elite Micro Shock-W makes this problem a thing of the past is its diminutive size. Sharing the same proportions as the Premier Elite Micro Contact-W, it can be easily concealed in uPVC window and door frames. Even where this is not possible, it is small enough to be used discreetly in a wide range of applications.

While best practice is for every external door and window which could feasibly bear the brunt of a physical attack to be protected with a shock sensor, this rarely happens. However, with the Micro Shock-W, problems such as the need to run numerous cables, and users objecting to large sensors fitted in plain sight are eliminated.

Additionally, because of the diminutive size of the device, it can be used for a wider range of applications, including a host of triggering tasks in smart intruder systems. 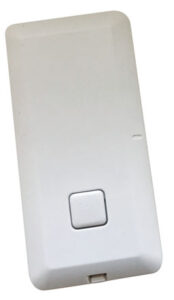 The shock detector makes use of Texecom’s established and proven Ricochet mesh-based network, and so forms a part of a self-healing wireless environment which is both robust and consistent in coverage. Long-term tests by Benchmark on the Ricochet wireless platform have proved it to be stable in a wide range of conditions.

Measuring 57 x 27.5 x 8.2mm, the size of the device also makes it ideal for monitoring secure safes and cabinets, storage units and drawers, both for security and automation triggering. It is powered by a single coin-cell CR2450 battery and has a claimed battery life of up to three years.

The Micro Shock-W is available in three finishes: white, brown and anthracite. This means it can be used with white, wood effect and aluminium finish door and window frames with little to no visible impact.
Using advanced accelerometer technology rather than piezoelectric sensing, the 868Mhz device features five sensitivity settings, allowing accurate performance regardless of the substrate it is installed on. Set-up is simple, making use of a single button.

The detector is tamper protected, and is compatible with Premier Elite and Premier control panels and Ricochet expansion packs. The sensor features a single push button and a multi-coloured LED to simplify set-up. It is supplied with a battery, an adhesive mounting pad with fixing screws, and an instruction leaflet.

The installation of the Premier Elite Micro Shock-W is quick and straightforward, very much like the installation of most Ricochet-enabled peripherals. The backplate of the shock sensor simply unclips using a small screwdriver to open the physical latch, and can be attached to the mounting substrate using the provided adhesive pad. 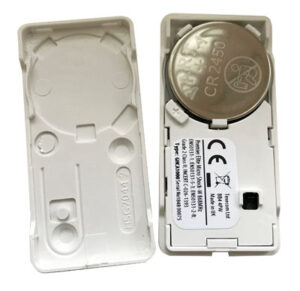 While the pad will be suitable for use in ungraded systems, we’d still advise using the supplied screws (which are required for a Grade 2 system) as well. If the shock sensor is in a hard to access position, it’s quite easy to pull it free from the substrate when opening for battery changes if the screws haven’t been used!

As with all Ricochet devices, Learning the shock sensor onto the alarm system is also a simple process. To quickly access the Ricochet learn menu, simply press the Omit key while in engineer mode. With the control panel in Ricochet Learn mode and an empty zone selected, the button on the front of the shock sensor needs to be pressed for three seconds. The sensor’s LED will turn from pink to green once the device has been learned.

If there is a need to relearn the sensor, the battery will need to be removed and reinserted to force the device into learn mode again.

It is worth noting that if you mount the backplate and then take the shock sensor closer to the keypad to initiate the learning process, the LED will show as orange as the device will be in tamper mode. Once fitted to the backplate, the status will show correctly.

There is a wireless range test which can be carried out using the shock sensor while the alarm panel is in commission mode. This can only be done during the first hour the sensor is powered up. By pressing the button on the detector for three seconds, the LED will flash pink, turning green when the wireless link is confirmed.

With the Premier Elite Micro Shock-W learned and mounted, the final step is to set the sensitivity. This process needs to be completed within 10 minutes of the device being learned onto the system.

The process is straightforward. By pressing the button twice, the shock sensor goes into sensitivity mode and defaults to Level 2, which is ideal for detection on framed glazed windows. Each press of the button steps the sensitivity level up one. Level 1 is the least sensitive (for use on wood), and Level 5 is most sensitive (for concrete substrates). The levels are indicated by the speed of the LED pulsing. Once the desired sensitivity setting is reached, the button is held down for three seconds. An impact test can now be carried out, and if further adjustments are required, the process is simply repeated.

For the test we added 10 Premier Elite Micro Shock-W devices to a variety of substrates, with each set up accordingly with regard to sensitivity. The detectors were installed in three buildings with distances of up to 80 metres from the panel, and all showed strong and consistent wireless links directly to the control panel.

Shock sensors are either going to detect impacts or not, and when configured properly with regard to the mounting substrate and the type of impact expected, they worked well. Catch performance was consistent, and only one unit required a tweak after the initial set-up. There were no false alarms during the test period, and only one nuisance alarm when maintenance was carried out near a sensor set as a separate zone which is permanently armed (and we forgot to disable it). Indeed, throughout the test the sensors performed as expected.

Texecom’s Premier Elite Micro Shock-W sensors are reliable and stable devices which will be popular with integrators and installers seeking a discreet low profile option for windows and doors. Their diminutive size makes them ideal for a wide range of applications, including the protection of other assets.

The Importance of GPUs for AI