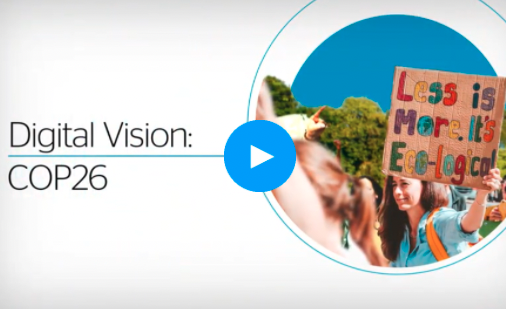 Atos participated at the Glasgow COP26 (Nov 1-12) highlighting the role that new and emerging digital solutions could have in helping organisations of every description reduce emissions.

In demonstrating its leading global decarbonisation credentials through a commitment to offset residual emissions by 2028 alongside introducing practical solutions for its client base as well as significant R&D investment in future digital technologies aimed at reducing emissions in new and effective ways, Atos is pressing the case for accelerated progress towards net-zero via its delegation of senior digital experts attending the summit.

Speaking at a panel organised by the United Nations Framework Convention on Climate Change (UNFCCC), Nourdine Bihmane, Global Chief Delivery Officer and Head of Net-Zero Transformation at Atos, made a case for digital to be considered an enabler of the transition to net-zero and a key accelerator of this process.

Ahead of the panel event, Nourdine Bihmane was reported as saying, “I believe a net-zero future is possible, but we must take bold action on a global scale. On this journey that we need to accelerate, digital is a lever to support both private and public sectors. Data is at the centre of this, to make accurate and timely decisions to measure, reduce and then remove excess CO2 from the atmosphere. At Atos, we have developed an end-to-end portfolio leveraging both technology and nature-based solutions to support this critical transition for our clients.”

Atos position is described on its Digital Vision: COP26 paper. In it, the company examines how organisations in every sector can harness digital technology to accelerate progress to net-zero targets and shape a sustainable future, with contributions from Atos experts and senior figures in business and politics.

Clay Van Doren, CEO, UK & Ireland and Northern Europe at Atos, said, “As a lead actor in the decarbonisation space providing both actionable solutions now, and R&D investment for the long-term, Atos calls on governments to seize this momentous opportunity for urgent collective action to deliver lasting change. Having committed to net-zero by 2028 and as a signatory of the Climate Pledge ranked Number 1 in the IT services sector by the Dow Jones Sustainability Indexes, we will lead the charge supporting governments and businesses to reach net-zero. That is why we are taking a full and active role in COP26.”

Atos has its own commitment to reduce the global carbon emissions under its control and influence by 50% by 2025, and to offset its residual emissions by 2028 – seven years ahead of the 2035 target previously set by the business.

Thermal cameras are on the rise across the globe