Increases in processing power have enabled smart technologies to be introduced to a wide range of security devices. In the world of video surveillance, these include intelligent video analytics, suspect tracking and AI-aided searching, but smart technology can also make a system more efficient. Increasing video resolutions can have an impact on bandwidth, but a smart system can offer a solution.

The growth is smart technologies has been a positive for many in the video surveillance sector. Decreasing costs for hardware, coupled with advances in processing power, have allowed integrators and installers to deliver high level security features (IVA tools such as line crossing, intruder detection, object tracking, loitering, etc. ) along with a host of other benefits such as business-based analytics (people counting, heat mapping and queue monitoring) through to ANPR and facial recognition.

One of the impacts of this change towards bespoke and smarter solutions is that end users are happy to invest in greater camera counts. This is because the additional devices deliver business and site management efficiencies. When a business case can be made for additional coverage, budget is easier to find if there is a clear and recognisable return on investment for the user.

Invariably, when a bespoke smart solution is deployed, the flexibility and ease of integration from an IP-based infrastructure makes a networked platform the obvious choice. With the growth in use of higher resolution cameras, plus demand for higher camera numbers, this does mean installers and integrators need to be aware of bandwidth constraints.

When considering the implementation of networked video surveillance systems, one of the major considerations has to be bandwidth management. There are many opinions about the best way to manage the load placed on a network by streaming video, but the reality remains that in order to minimise bandwidth requirements, you have to reduce the amount of data being transmitted. That is somewhat ironic in today’s market, given the main reason for end users investing in HD and 4K UHD video is to improve the quality of the video image, which is achieved by generating more data.

Not only do increases in video resolution add to the load, but additional cameras-based tasks can create vast amounts of data packets, all requiring bandwidth and storage. With finite network resources, in many applications the only answer is to take steps to manage the load.

End users demand and expect detailed images and real-time video. Combined, these two elements will cause the video to consume a greater amount of bandwidth. Some of the more commonly used approaches to bandwidth reduction are based on techniques hailing from the analogue video era (ironically when bandwidth was not an issue, but recording multiple video streams to one device was).

These approaches include recording at a lower resolution than that being viewed (this used to be achieved by recording video fields instead of frames) and reduced frame rates.

It should be noted that these approaches will introduce unwanted compromises with regard to video quality. Any integrator or installer delivering a credible solution should be wary of such basic steps.
Where HD or 4K UHD video has been specified, such an approach is unacceptable. Both video formats are established standards which have been created outside of the security industry.

If the available bandwidth isn’t sufficient for the number of cameras being deployed, the use of smart technologies can provide a solution.

It may seem like a small point, but the best results come when integrators and installers stop thinking about bandwidth reduction, and consider smart bandwidth management instead. The goal is to utilise the available resources to ensure delivery of the best quality video possible — when it is required.

This means the goal for the engineer is to ensure the full resolution and specified frame rates can be achieved for any critical security video footage. The key word here is ‘critical’.

Basic surveillance cameras will use up bandwidth resources regardless of whether the captured footage is critical or not. This means much of the bit-rate budget is used delivering information that does not include data of value.

By way of an example, if one part of a site had a bandwidth budget of 40Mbps and includes 10 HD cameras, common practice would be to ‘share’ the bit-rate between devices. If one camera captures footage of an incident, it might be the case that the other nine cameras are capturing nothing of importance. The result is 90 per cent of the bandwidth budget is being used gather video of no real importance.

The challenge is to ensure cameras delivering images of no great importance do not use significant amounts of bandwidth, thereby allowing those with important information to increase detail and quality by using an appropriate level of bandwidth. Because of the unexpected nature of security, it’s impossible to know which cameras will capture critical video at any given time, so the issue requires a dynamic solution to regulate the bandwidth dependent upon what is happening in the scene.

Recent increases in computational processing capabilites have delivered many benefits for video surveillance. Analysis and on-the-fly action triggering have made the automation of many features simpler to implement. A growing number of manufacturers are using this capability for bandwidth management, in the form of dynamic encoding.

Dynamic encoding controls video processing according to information within the viewed scene. As the scene content changes, so the encoding configurations are automatically adjusted. These can include resolution, frame rate and even GOP settings. 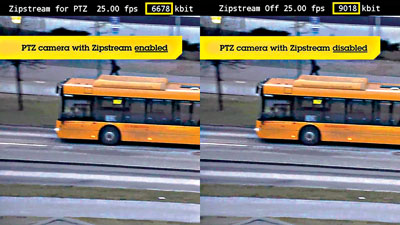 In many applications, the interpretation of what is important video data will be based upon movement. If the scene is static or only includes limited motion such as trees swaying, it will usually contain nothing of interest. However, if someone enters the viewed area, movement is detected by the encoding algorithm and the video is treated as important. In short, if an exception occurs, dynamic encoding increases the base resolution and frame rate, either for the whole scene of the region of interest.

It is vital to understand dynamic encoding will not suit every application. Just as other video analytics and smart processing are not ideal for every site, the same is true for dynamic encoding.

Because dynamic encoding makes use of exceptions, it is not suitable where scenes are busy and contain a high level of motion. In such circumstances, dynamic encoding will not create significant efficiencies.

Dynamic encoding engines differ from manufacturer to manufacturer, in terms of which parameters are adjusted and how the changes are applied to the video stream. However, results are often best when the viewed scene is typically static, relatively clean and well lit at night.

Most manufacturers state bit-rate savings in terms of percentage decreases. To make sense of these figures, it is important to establish what is being compared.

Some of the more dramatic comparisons will consider dynamically encoded H.265 video against standard H.264 video. To get the best idea of the difference, ask for figures where the same compression codec is used.

If the tested camera view contains little or no movement, this allows dynamic encoding to be significantly more efficient. However, even small amounts of motion can vary the balance and impact on bit-rate savings.

Dynamic encoding can also be adversely impacted by rain, fog, noise and environmental scene change.
The methods use to illustrate bandwidth differences are typically honest, but may not be a true reflection for all sites. The best way to assess the savings that you are likely to make is to carry out a field trial.

For many, the important question is what sort of bandwidth savings can be achieved with the use of dynamic encoding? Benchmark has carried out several trials using various devices from a number of leading manufacturers, testing the algorithms using a variety of real-world scenes in various conditions.

With the preservation of image quality as our main criteria, scenes with a low level of movement (occasional foot and vehicle traffic) saw average bandwidth reductions of up to 53 per cent in good conditions. With medium levels of motion (more frequent foot and occasional vehicle traffic), this fell to an average of 37 per cent.

At night, with a low level of illumination (around 3 lux at the viewed scene), the general savings were roughly 20 per cent for low level motion and 14 per cent for medium activity. However, when infrared lighting was used during darkness, the savings increased to 49 per cent with low motion, and 34 per cent with medium levels of activity.

It must be remembered that these figures will be particular to the circumstances during out test and the conditions at the site. Dynamic encoding will be more effective is the viewed area is a sterile zone, and the technology will be less effective if the area has a higher level of motion, or if the video stream is noisy during periods of low light.

In some applications, such as retail establishments or in public areas, where there is some degree of motion present at all times, the savings will be significantly lower, if even measurable. However, many cameras include dynamic encoding as a core feature, allowing integrators and installers to experiment and see if it adds value.

In the right circumstances, dynamic encoding works well and delivers significant bit-rate savings. With an increasing number of cameras including this functionality, it is always worth testing a camera to see what savings are achievable.

For many the debate will be whether it’s worth specifying better cameras to enjoy the benefits of high quality dynamic encoding. The answer is simple: where site conditions are right and bandwidth requires careful management, the technology does offer a solution, and often the camera upgrade cost will be less than upgrading the infrastructure.