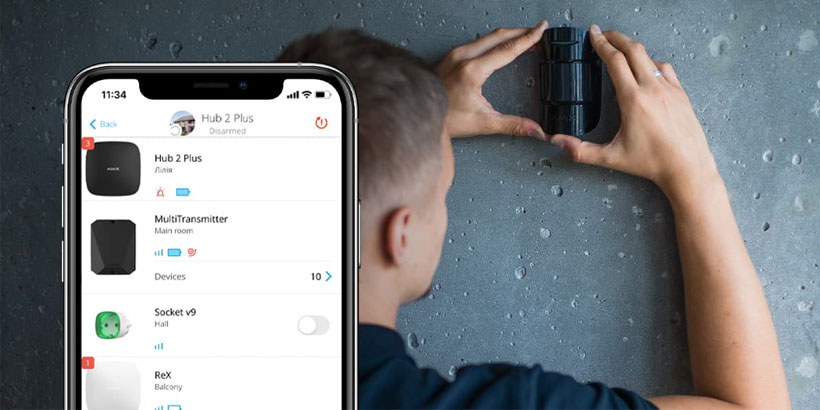 Ajax Security Systems has launched OS Malevich 2.10, which brings best practice in countering false alarms to the Ajax security system, along with compliance to PD 6662 which applies European standards for intrusion and hold-up alarm systems. Systems with OS Malevich 2.10 broaden the potential applications for the system.

One of the new features is alarm confirmation. The system transmits a separate event to confirm the alarm to the ARC. It can generate a confirmed alarm condition when multiple intrusion events or hold-up devices are triggered. When setting up the system, the installer selects which devices offer confirmation, including the time interval for alarms. The feature is located in the service settings of the hub.

The PA button includese protection against accidental activations. With OS Malevich 2.10, the system supports DoubleButton, a new hold-up device from Ajax Systems. DoubleButton will activate only if both buttons are pressed simultaneously. A special barrier prevents accidental activation. The PA button can be  carried in a pocket as a key fob or hung around the neck.

Also, DoubleButton can generate a confirmed hold-up alarm event. To do this, the buttons must be pressed twice in a different way (short and long press), or two DoubleButtons can be used.Video Player

The System restoration after alarm feature prevents the Ajax system from rearming after being triggered. To arm the system, the incident must be checked and the system restored by an authorized user. This feature helps engineers to monitor system status.

Two-stage arming splits the arming process into two stages: initiation and finishing. Users can initiate arming using a control device (SpaceControl or KeyPad ). The system will be armed when a Second-Stage Device is triggered; for instance, when closing the door on which DoorProtect is installed. Users can also initiate arming from the Ajax app: in this case, the system will be armed if no detectors are triggered within a specified time.

Device auto deactivation allows the system to ignore detector events if a sensor has not returned to its initial state within a specified time. This feature is useful if the detector is damaged or incorrectly installed, and there is no physical access to the protected object.

Alarm transmission delay when disarming allows postponing the alarm communication if the Delay When Entering has expired and the security system has not been disarmed. When the entry delay expires, the system signals an alarm locally: it activates the connected sirens but does not transmit the alarm to an ARC. This provides users with additional time to disarm the system without a false alarm sent to a monitoring station. The feature also allows using the KeyPad (which only activates after the entry delays have expired) as an alternative disarming device.