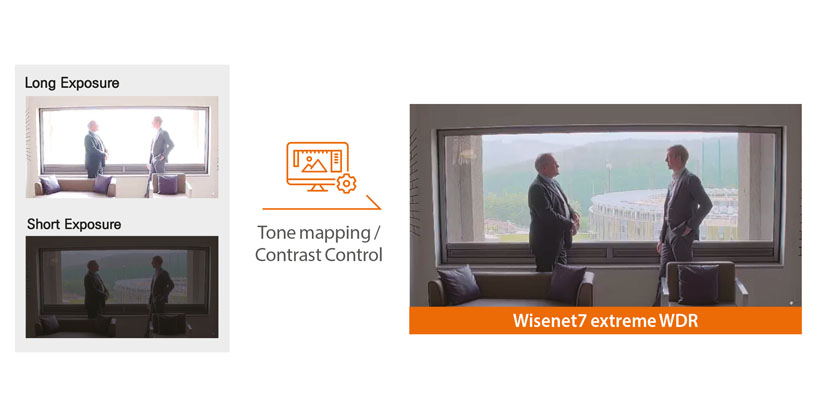 Modern surveillance cameras include high levels of functionality, and the headline features at the moment are smart detection and tracking, dynamic encoding and the use of third-party applications to enhance performance. While these functions are undoubtedly beneficial for many end users, nothing is more important than the capture of usable video. Although not new, WDR (wide dynamic range) remains essential where high quality video is needed.

It doesn’t matter how smart a camera is, without clear, detailed video images, it will struggle to deliver the results expected by the user. The capture of detailed images in environments with unbalanced illumination has always been a problem for video cameras. If there is a need to view very bright areas in a gloomy scene, or indeed dark areas within a brightly lit area, this is a challenge for basic camera chipsets.

For example, if there is a need to capture video at an external door in a shop to see who is entering, or if it is necessary to cover both the internal and external views through a shop window, with standard video there would have to be some compromise.

If a camera faces a door into a premises, standard video will need to be configured to show the internal area, losing details of the individual entering, or vice versa.

If the camera is configured to view the internal space, the bright light from outside would lead to white-out when someone enters, effectively making it difficult to identify an individual accessing the premises. If, on the other hand, the camera was configured to handle the bright daylight to identify those entering, the interior of the premises would be gloomy, noisy and often very dark.

The human eye can render images in challenging situations, but it is a marvellously complex piece of engineering. Cameras, on the other hand, struggle with drastic illumination variance.

The issue of viewing both dark and bright areas in one scene is addressed by WDR functionality. Over the years since its introduction to video surveillance, WDR capabilities have been enhanced, to today’s latest generation solutions offer the best performance ever, without issues such as smear, bloom or tear along contrasting edges.

WDR technology makes a significant contribution to the effectiveness of video surveillance in harsh lighting conditions. The difference in the lighting levels in a viewed scene is described as the dynamic range. The greater the dynamic range, the more significant the challenge in terms of capturing images with a clear view of all parts of the scene.

WDR is such an important feature it is offered by almost all of today’s professional level video surveillance cameras. WDR balances out lighting differences, with cameras from different manufacturers using several ways to achieve this. The first is to take samples of the pixels which make up an image and then use mathematical algorithms to calculate what the values across all areas of the image should be.

The second, and many argue the more accurate, method involves capturing, in quick time, more than one version of the same image with each at different exposure levels. Many cameras which offer WDR do so by capturing one underexposed and one overexposed frame of the same scene, and these are simultaneously processed to produce one optimised image.

The advanced form of WDR incorporated into Wisenet X two-megapixel cameras has taken this second method a stage further. It uses four frames to create a more natural image at up to 150dB, with stream rates of 30 images per second. It also incorporates innovative technology to remove the blurring which can occur when conventional WDR is in use. What has made this possible is the processing power of the chipset which is at the heart of the Wisenet X camera models.

WDR has perhaps been taken to its ultimate level with the recent introduction of Hanwha Techwin’s proprietary Wisenet7 chipset. This is equipped with extremeWDR, Hanwha Techwin’s latest multi-frame WDR technology. This enables the camera to take full advantage of image contrast to see detailed objects in environments with strong backlight conditions. The extremeWDR function utilises a number of new technologies, including Local Contrast Enhancement which stretches the contrast of any image by analysing neighbouring pixel data, and Scene Analysis which manages the dynamic range and refines the overall tone of an image.

Whilst WDR is only one of many features listed on a camera’s specification sheet, the contribution it can make to the effectiveness of a video surveillance system should not be underestimated. Indeed, any form of WDR will deliver some benefit, but if there is an operational requirement to locate cameras in sites with varying lighting conditions, it will always be wise to take a close look at what the manufacturer claims it can deliver. Never hesitate to ask for a demonstration if you have any doubts.