External detection has always been a sought-after element of a security system for many end users. While various policies and regulations pushed the focus onto internal systems, end users like external sensors for a simple reason: they want the earliest possible notification of an attempted intrusion.

While internal detection is a proven and valuable tool when protecting a site, it alerts of an intrusion once the intruder has broken into a site. If an intruder is already inside the building, there is a chance they will remove assets when making a getaway if the alarm sounds. There will also inevitably be damage which will need rectification.

External detection not only detects intruders before they have gained entry to buildings, but it also allows the use of additional systems – audio warnings, video surveillance, lighting, notifications to security personnel – which can often be used to prevent an incident from escalating.

OPTEX offers a full range of panoramic outdoor intrusion sensors featuring a 180 degree detection area with up to 12 metre detection range. The WXI and WXS series provide a wide choice of models to protect the exterior of residential and commercial buildings as well as flat roofs. 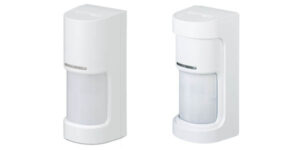 Detecting intrusion at the earliest time possible is what OPTEX has been focusing on for the last 40 years by delivering an extensive line-up of reliable outdoor intruder detection sensors. The WX sensors are a excellent new addition to the outdoor portfolio; they can be connected to wired or wireless alarm panels or to video surveillance systems to trigger an alarm when a moving person or vehicle is detected in the defined area.

The WX sensors can provide two, independent 90 degree detection areas, one for the left side and one for the right. The detection distance ranges from 2.5 metres to 12 metres, and the sensitivity and alarm output can be set up independently for the areas. One area, for example, can be set at 12 metres detection range at medium sensitivity with the other at 6 metres with high sensitivity. This gives options to adapt to the site’s configuration and environment.

A patent-pending area-masking shutter allows a sliding mechanism to quickly mask an area to narrow the detection area, avoiding obstructions such as swaying vegetation. The set-up procedure includes an automatic walk test mode to ensure faster and more accurate installation.

The sensors perform reliably in hot and sunny environments, featuring double conductive shielding to avoid false alarms triggered by sunlight or RFI. Temperature compensation automatically adjusts the sensitivity level depending on the ambient temperature. All sensors are IP 55 rated, making them suitable for all kinds of weather.

The selectable pulse count also has the option to enhance sensor sensitivity.

All WX models feature a tamper-proof back panel to detect if attempts are made to remove the sensor from the wall, and the anti-masking models (WXI-AM/ WXI-RAM / WXS-AM/ WXS-DAM/WXS-RAM and WXS-DRAM) alarm if anyone tries to cover the lens.

For both residential and commercial applications, it is important that the sensors don’t get triggered by small- to medium-sized animals such as birds, cats, dogs and foxes. OPTEX WX sensors provide a very reliable small animal tolerance.

Across both WXI and WXS series a total of eight models are available. The WXI series should be mounted at between 0.8 and 1.2 metres and includes two wired models and two wireless, with and without anti-masking features. All four WXS models feature anti-masking, and can be mounted low or at 2 metres. With two wired and two wireless models, the sensors provide dual-technology protection combining PIR and microwave.