Having children can be a serious investment. Parents will usually need to buy a whole bunch of products associated with the needs of the child, from car seats and cots and pushchairs, to nappies and blankets and bath toys, not to mention bibs and highchairs and everything associated with keeping a young one healthy, happy and safe.

Thankfully today, more and more parents are also keen to ensure they consume conscientiously, reducing their impact on our fragile natural environment as much as possible. It’s at the meeting point of these two realities that Natural Baby Shower (NBS) resides.

NBS was established by Vics Hampson and Clifton Vaughan in 2007. Vics and Clifton wanted to provide parents with natural and sustainable baby products that offered the very best for parents and babies, as well as the planet, all under one roof.

“We’re all about looking after parents on their journey with a newborn,” Clifton explains. “So we want to find out what they want, and we aim to buy in products that last, that transform into other useful products, that are sustainable and so on. For us, it’s really about the conscious buying process.” 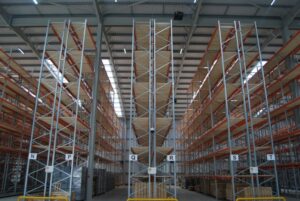 Natural Baby Shower has grown from a team of two to over 70. They’ve moved from a kitchen table to a small store in Surrey, to a much bigger HQ in Bracknell. In 2021, with business booming, NBS decided the time was right to move operations just down the road to a brand-new facility: a 43,000 square foot warehouse and office space.

In making this latest move, the company decided to draw on the expertise of Maybin Electrical and Hikvision to keep its HQ safe and secure.

“We distribute everything ourselves,” Clifton explains. “Everything is sourced from top brands, and we bring them in, stock them, store them, and ship them when orders are placed. That shipping is also done as sustainably as possible, minimising the number of trips that need to be made. It’s all part of what we see as being a modern retailer.”

That modern retail approach also embraces the intelligent and efficient use of technology. So when NBS were planning their new facility, they made sure to reflect their innovative and forward-thinking business approach in their use of video security at the new HQ.

“The new building includes office space, a canteen area, packing rooms, warehousing with racking, and outside loading areas. We worked with a company called3-Space, which took over the project build in the new facility,” Clifton Vaughan says. “One of their suppliers was Maybin Electrical, and Maybin was responsible for the install of our Hikvision video security system.”

Jay Maybin, MD of Maybin Electrical, describes the set-up at Natural Baby Shower HQ, “They have the crime prevention side of the system, both internal and external, with cameras detecting intrusion and theft, but they’re also very focused on the health and safety side of things. With warehouse shelves 13m in the air, they need to see if someone has an accident, or if a piece of equipment has been misused and is creating a hazard.”

Clifton Vaughan elaborates on this point, “There are two elements for health and safety,” he says. “One is to cover the business, to ensure that equipment and facilities are free from harm and misuse. And then from an employee point of view, we’ve made sure that emergencies and incidents will be detected and addressed promptly so that the employees are properly protected.”

Clifton Vaughan explains that the system can also be used to track an item’s journey off a lorry and into the warehouse, as sometimes products can be misplaced.

“We’ve had a couple of occasions when we’ve argued with suppliers over whether something has been delivered or not,” he says. “And in the past, I’ve used my Hikvision control software to track down where an item has gone on its journey from truck to warehouse on a pallet, and the cameras have shown that there were, say, umbrellas on top of the pallet up high where no one had seen them.

“Now, with the new Hikvision system, I’d be able to watch that pallet come off, watch it go in, see when it’s picked up next, where it’s distributed to, and then I could pull it back down and find it easier.

“With our warehouse software, we have total visibility on every scan that’s made. If something is put on the wrong shelf, we can now potentially trace back to the moment the scan was made and use the cameras to follow the product and see which shelf it has ended upon. It solves a problem that does crop up occasionally.”

Cameras used in the NBS system include 12MP Fisheye models, which are ceiling-mounted and use a ‘fisheye’ lens to provide a 360-degree view of the area in their viewing radius. The warped image they generate is then ‘dewarped’ using inbuilt software, and the resulting conventional image provides extremely effective all-around coverage. 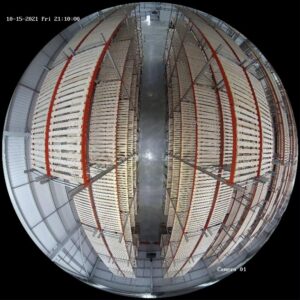 “We installed Fisheyes in the general areas, the offices and product areas,” Jay Maybin says. “That’s incredibly useful because with the Fisheye you have one camera doing the job of four. There are cameras high on poles in the warehouse to enable them to see all the way down the aisles. The Fisheyes provide a general view, and then they can zoom in for more detail.

“So if there’s a forklift and a picking machine at each end of the aisle, and something happens in the middle, they’re able to see that without having their view obscured in any way.”

Three PanoVu panoramic cameras cover the entire loading bay area, ensuring no detail is missed. These are used for seamless coverage of large areas, with a full 180-degree view effectively doing the job of multiple cameras simultaneously – but with only one camera cable required. The whole system is run using HikCentral management software and records to a central network video recorder.

“For perimeter detection, we are using fixed bullet cameras, turret cameras at a low level at the front, and high range PTZ cameras with detection, classification and tracking functionality,” Jay Maybin says. “If someone approaches the building out of hours, the system will detect them and NBS will get a notification to say someone’s there, and intrusion is prevented.

Those external cameras include 8MP PTZ cameras with 42x zoom, their high-resolution capabilities allowing them to pick up detail from hundreds of metres away. DeepinView 7 series cameras offer automatic classification and tracking of vehicles entering or attempting to gain access to the premises.

The HikCentral software which manages the solution is designed for intuitive use, enabling end-users to efficiently review live and recorded video from the cameras and to manage the alarms and alerts it generates. HikCentral also monitors the system and provides notifications if any device develops an issue or stops working for any reason.