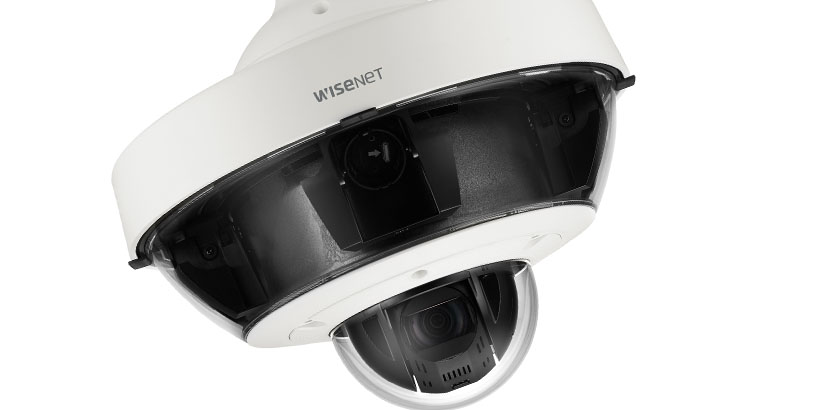 Two Wisenet cameras equipped with Hanwha Techwin’s Wisenet7 chipset have expanded the company’s portfolio of multi-directional cameras. The 4-channel PNM-9022V utilises blending technology to stitch the overlapping images captured by its four HD sensors into a seamless 8.3-megapixel 209 degree image. The camera can also capture 180 degree images, with operators able use digital PTZ functionality across two of the camera’s channels.

As a camera which incorporates the UL CAP certificated Wisenet7 chipset, the National Defense Authorization Act (NDAA) compliant PNM-9022V is packed with technologies to protect it from cyberattacks. It also benefits from a proprietary device certificate issuing system which embeds unique certificates into Wisenet7 products during both the development phase and manufacturing process. This further enhances the camera’s ability to prevent hackers from tampering with its firmware.

The four camera sensors are equipped with 2.8mm fixed focal lenses, and can capture high definition colour images with light levels as low as 0.03 Lux.

Wisenet7 also features the proprietary ‘extreme’ WDR technology which, performing at up to 120dB, utilises new Local Contrast Enhancement and Scene Analysis technologies to enable the camera to capture clear images from scenes containing a challenging mix of bright and dark areas.

Lens Distortion Correction (LDC) technology corrects the distortion created through the use of wide-angle lenses. This delivers images which more closely resemble what is seen through the human eye.

Two MicroSD/SDHC/SDXC slots enable up to 1TB of video or data to be stored at the edge should there be disruption to the network. Video of any incidents, which potentially might have been lost on the recorder side, can be retrieved from the camera when the network connection is restored.

Coinciding with the launch of the PNM-9022V, the PNM-9322VQP with four sensors and an integral PTZ camera, is designed to provide a highly cost-effective solution for detecting and tracking objects over wide open areas.

The option of exchangeable 2 and 5 megapixel lens modules enables the camera’s sensors to work together to capture 360 degree images of up to 20 megapixel resolution. In addition, the device’s PTZ camera element can be configured to zoom in and track a moving object or move to a user-defined preset position when the line crossing detection function of the multi-directional camera detects activity.