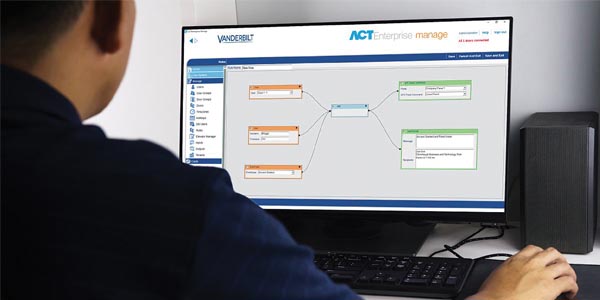 The delivery of smart solutions is significantly simpler and more effective where ‘cause and effect’ logical programming is implemented. While this is increasingly popular in video surveillance solutions, and is now a key part of smart intruder alarm systems, its introduction into access control solutions has been somewhat slower. Vanderbilt’s rules mapping feature brings smarter functionality to access control solutions via its latest release of the ACT Enterprise software.

The latest release of the ACT Enterprise access control software from Vanderbilt offers a number of advanced features designed to assist integrators and installers in meeting and exceeding user expectations. It ensures the creation of smart solutions is a simple task, regardless of an engineer’s access control experience.

The use of Rules Mapping – cause and effect logical programming that allows triggers and actions to be linked with ease – elevates the system to allow complex programming options to be implemented with ease. Rules Mapping has been introduced to ACT Enterprise, enabling integrators and installers to deliver value-added benefits to customers without a need to learn additional skills, such as writing complex code.

Vanderbilt’s Rules Mapping is simple to use, relying on a drag-and-drop interface with point-and-click configurations. Based upon the use of triggers such as system input and output changes, access control transactions, system status conditions and triggers from other integrated systems, it adds a depth of functionality that not only enhances security, but also allows the provision of business intelligence and site management.

A depth of options

The possibilities available from Rules Mapping vary, dependent upon the devices and integrations on the access control system. The more data the system can access, the higher the level of flexibility. If a system can share data, it can be used as a part of Rules Mapping programming.

Understanding the scope and flexibility of Rules Mapping is vital to getting the best out of the feature. It also helps to have an understanding of your customer’s business needs. When discussing their requirements, too often integrators and installers will only investigate their security needs. However, because Rules Mapping uses real-time status-based data to trigger actions, it can add a huge range of benefits. That said, Rules Mapping can also enhance the security operations but automating certain aspects of system performance.

Another side of Rules Mapping is that the feature can simplify housekeeping tasks, both for the end user and the integrator or installer. Rules can be created to generate reports and send notifications, either in real-time or as scheduled regular reports. Notifications can be used to assist with site management, and the information can be sent to other departments where necessary.

One example of how Rules Mapping can help reduce costs is with regard to interlocking doors. In many high risk areas, the use of interlock doors is often specified. To implement such a solution typically requires hard-wiring between the two door sin question. However, the flexibility of Rules Mapping provides a solution that is quick and easy to implement.

The procedure involves the creation of two rules. The first implements an action whereby if Door 1 is open, Door 2 is locked. When the contact on Door 1 closes, indicating it has been secured, Door 2 can then be opened. Additionally, by simply dragging in another Rule element, the auxiliary output can be used to activate a visual indicator that Door 2 cannot be opened until Door 1 has been secured. The second rule repeats this functionality, so that if Door 2 is open, Door 1 remains locked.

This is achieved by using a NOT clause, which simply tells the system that both doors cannot be open at the same time. Further additions would allow the use of the interlock function to be removed at certain times or under other specific circumstances.

Moving away from security, ACT Enterprise offers basic time and attendance functionality. This might be used for payroll purposes or a host of other business efficiency initiatives. Using Rules Mapping, it is simple to automatically generate an email notification to a manager or the HR department if staff are late into work or leave the building earlier than expected.

To achieve this, the integrator or installer simply identifies the relevant user group to be checked, the access reader which is used as a dedicated clocking in and out terminal, and identifies the action that is being managed, in this case clocking in. A filter is then set with a time period, for example between 09.10 and 17.30. These criteria and linked via an AND clause, meaning an action is only taken when a member of the specified access group uses the clocking in reader after 09.10 in the morning.

The relevant action is then configured, which would be to send an email notification to a relevant member of staff or department. A counter could also be incremented if required.

Early clocking out is established by simply changing the action to clocking out, and adjusting the time period.

Staying with business efficiencies, a simple rule could be created to ensure lighting is turned off when a department or building is empty. This can be achieved by occupancy, whereby the rule increments a counter as people enter and decrements it as they leave. If the user count is zero, the lighting is switched off. A timer could also be used, specifying time windows when the building is not occupied. Finally, a third option would be trigger lighting via an input state. The three options are linked via an OR clause, so any one of the three causes the change to occur.

A similar rule could be created to switch lighting on by changing a few of the parameters.

It is also possible to create door actions which are triggered by events from other systems. For example, Rules Mapping can be used to set or unset the intruder alarm system (ACT Enterprise integrates with the SPC intruder alarm system). This can be done based upon access transactions, and can be further filtered by use of a time and/or date schedule.

Using the user count function, the trigger for the alarm setting, plus locking of all doors, would be when the value decrements to zero after a specified time window is reached: for example, 18.30. Using an AND clause, both the occupancy would need to be at zero and the time would be after 18.30 in order to lock all doors and set the alarm system.

The options available from Rules Mapping are vast and allow a wide range of actions to be triggered, creating smarter solutions with ease. For integrators and installers, it allows the creation of bespoke systems that deliver a genuine return on investment.

The Need for Robust Integrations