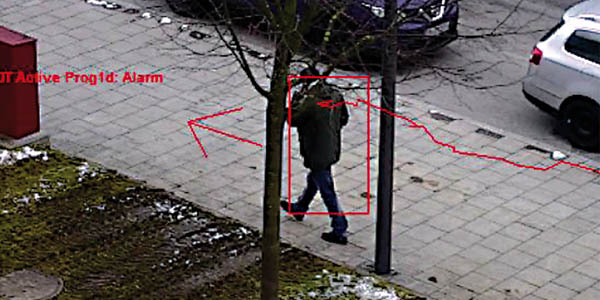 For many high risk applications, the ability to effectively and easily operate a video management solution is critical to ensure proactive protection of people, premises and assets. Modern solutions enable the capture of ever increasing amounts of security data, and when an incident occurs, it is vital the operators have access to the right data without any risk of interference or human error. To facilitate smart operations, IPS offers VideoManager 3D VMS, which boasts a host of intelligent features.

If video management systems in complex high risk applications have one flaw with regard to performance, it is that the operational flexibility and scalability can overwhelm an operator. For example, a member of the security team might be responsible for managing events across a number of sites, spread across multiple geographical locations. The operator is unlikely to have an in-depth knowledge of every single site, and so remembering the cameras numbers or names of locations can be problematic.

When an incident occurs, the operator is immediately placed under a high degree of pressure. In such conditions, they might struggle to remember details that, under normal conditions, they could recall with ease. If a target is being tracked and takes an unexpected turn, the operator has a split second to remember which camera needs to be called up. The site might be one that the operator has never visited. Mistaking Camera 32 for Camera 23 could be enough to miss where the target goes next. By the time they select the view, use a PTZ camera to search, realise it is wrong and select the correct one, it might be too late.

Critical infrastructure sites require the highest level of security because they are crucial for national continuity.  An entire nation will depend on electricity, water, IT, transportation, etc.. In the event of failure or impairment, supply bottlenecks can cause problems with long-lasting effects. Significant disruptions to public safety, national security or other serious consequences can occur.  Citywide or even nationwide, an attack at a power station can cause large-scale power outages.

IPS has, for decades, dedicated itself to creating workable and efficient video surveillance solutions. When it created its VideoManager VMS software, the issues relating to operator efficiency in high risk applications were at the forefront of the company’s thinking.

The VideoManager VMS makes use of 3D technology which enhances the operational feature-set, delivering added value and significant benefits for end users. In many cases, the decision to select VideoManager over other VMS options will be to exploit the enhanced value on offer from the software’s 3D technology. 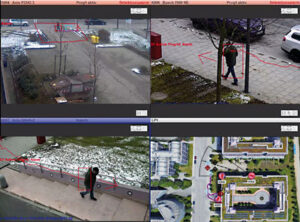 VideoManager is, in itself, an open platform flexible VMS with support for a wide range of third party devices, including access control. The VMS includes motion detection and sabotage detection, and additional IPS intelligent video analytics can be added via licence upgrades. The VMS has been designed to be intuitive, and the client uses three screens: Alarms, Live and Playback.

Visualisation of sites is available via site plans, and a web-based client and mobile client are available.

However, the real strength of the video management system lies in its use of 3D technology, which can either be manually deployed or automated via triggers. These can include integrated IVA options or other alarms, linked through system actions.

The basis of 3D technology is powerful geo-referencing. This allows the system to be aware of the exact location of cameras and other devices, and to correlate the data with absolute positioning devices and smart system maps.

The 3D technology from IPS has been designed to work on a system level rather than at a camera level. In other words, it adds intelligence to the relationships between cameras, and between edge devices and the graphical user interface. While an integrator or installer might only select certain devices in a system to be linked via the 3D technology, its implementation should be planned on a system-wide basis.

Activation of 3D capabilities is achieved via licensing, so there is no need for additional hardware or software.

In order to leverage the smart capabilities of 3D technology, the creation of AutoCAD site plans is required. These provide the relevant data to coordinate camera views and location information via the interactive site plan. A wide range of data is used to ensure accuracy, including camera location, mounting height, lens configurations, camera chip size, etc..

Recognising that the actual installation may have some small degree of variance with plans, the system makes use of reference points, thus allowing any anomalies to be easily corrected.

IPS does offer support with regards to the creation of the AutoCAD plans, so that is a benefit for integrators and installers. This approach also ensures that the system operates to its optimum potential in the field.

The final requirement is the use of certain IPS video analytics to allow triggering and to perform smart dome tracking.

The benefits of 3D

The IPS 3D technology makes use of geospatial referencing to deliver accurate levels of camera control, alarm handling and target tracking during an incident. There are three ways in which 3D technology can be deployed: intuitive PTZ control, manual object tracking and automated tracking over multiple devices. 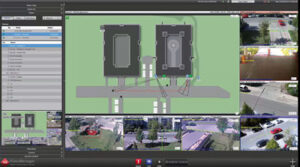 With regards to PTZ control, 3D technology provides a simple and flexible telemetry control option. This is implemented either through a mouse-click within a selected video stream, a mouse-click in a site plan, or by selecting objects of interest in a linked static camera view.

With an active video stream from a configured PTZ camera, the operator can quickly zoom in on objects of interest by simply clicking on them. They can also control telemetry within the viewed scene, panning and tilting to manually track targets. This is achieved in any active window, whether it is the main display or a sub-window.

The operator can also click on a camera in the site plan. Hovering over the camera icon brings up a thumbnail of its view, allowing the user to check it is the right device. By selecting a scene in a multi-view display, the camera is highlighted on the plan, along with an indication of its field of view. Dragging this enables PTZ control, vastly simplifying operations, or by clicking on a specific point on the map, the nearest fully functioned camera will move to cover that area.

Finally, if an overview static camera is linked with the PTZ device, the operator can click at certain points in the overview scene, automatically sending the PTZ camera to the relevant position. This allows incidents and events to be examined in detail without the operator losing the overview of the protected area.

All three telemetry control options are intuitive, and different actions can be configured to offer a high degree of flexibility.

When manual object tracking is used, the operator can identify a target of interest, and the specified dome camera will then use the IPS Dome Tracker analytic to follow it. Other moving targets in the scene do not interfere with this process, and so it offers operators a ‘hands-free’ option, allowing them to use other equipment such as radios or reporting tools without losing track of the person or vehicle being tracked.

However, the most impressive function of 3D technology is alarm-based object tracking with handover. This responds to IVA alerts, initiating automatic control of a PTZ camera in response to an event from an overview camera. Once the feature has been triggered, the PTZ camera automatically follows the alarm object, tracking it without any need for operator intervention. When the target reaches the end of the range for the tracking camera, the 3D technology automatically hands over to an adjacent linked camera, which continues tracking.

For example, a fixed camera with object detection IVA overlooking a secure area’s gateway could detect vehicles exiting. This creates an alarm, and a linked PTZ camera would be moved to the configured preset position. Using the Dome Tracker analytic, it would then automatically track the vehicle without any intervention from the system operator. When the vehicle reaches the end of the PTZ camera’s range, it will handover to a linked camera. This works as there is an overlap between camera views, and transition activity in these areas following an alarm prompts the adjacent camera to move to the relevant position. It then starts using the Dome Tracker algorithm.

This functionality adds value for the user and makes the operator’s task simpler during critical incidents.

IPS VideoManager’s 3D technology uses artificial intelligence to deliver benefits which provide a valuable and smart addition to traditional video surveillance protection. The technology increases the efficiency of systems, and also boosts the return on investment for customers. It is a smart solution which actually solves an issue many video surveillance users face.