University of Massachusetts shifts from analogue to digital

The University of Massachusetts in Amherst, Mass., (UMass Amherst) located in the Pioneer Valley maintains a sharp focus on the security and safety of the campus population of more than 32,000 and has been executing a strategic shift from analogue to IP video, integrated with access control and intrusion detection.

As technology has progressed, so has UMass Amherst, seeking solutions to effectively leverage current components while migrating to networking technologies and future-proofing surveillance recording solutions with the ability to incorporate the latest, high-resolution megapixel cameras.

When the university’s legacy, siloed recording system was nearing its end of life several years ago and would no longer be supported, it was time to re-evaluate the present with an eye to the future. UMass needed to incorporate existing analogue where necessary yet add the highest quality IP video when and where it needed as the campus continued to grow.

For this enterprise, UMass Amherst called on the expertise of Salient Systems, which is a software provider of comprehensive, enterprise-class Video Management Software and Systems.

The UMass video strategy is purposeful and planned – with the evaluation of new products focusing on the openness of solutions, ease of use and keeping bandwidth from being taxed as the security department and police department pull video locally across the LAN for investigations and forensics.

UMass Amherst sits on nearly 1,450 acres in western Massachusetts, 90 miles from Boston and 175 miles from New York City. The campus provides a rich cultural environment in a rural setting close to several major urban centres. The UMass Amherst Police Department (UMPD), located on campus, works in partnership with the staff of the Residential Life Operation Center to ensure that its residence halls are safe places to live. The UMPD is a full-service police department with sworn officers, police dispatchers, non-sworn professional staff and over 200 student security employees.

The university first piloted video monitoring and recording beginning in 2001 in several buildings with different footprints and configurations to see how it would be managed.

“I was then tasked with installing cameras in the residence halls over a 10-year period, starting in 2003 to 2004,” said Jim Meade, Residence Hall Security Manager, UMPD.

“One of the other aspects that really compelled us to select Salient Systems was that we had a desire to substantiate and verify door alarms in the C•CURE by Software House access control event management system from Tyco system, added Meade”

“It was originally a 10-year plan, which we accelerated to three years and coincided with the rise of the Boston Red Sox. For excited fans at the college, their behaviour wasn’t always ideal. By the end of summer 2006, we had cameras in all of the 45 resident halls at the time,” he said. 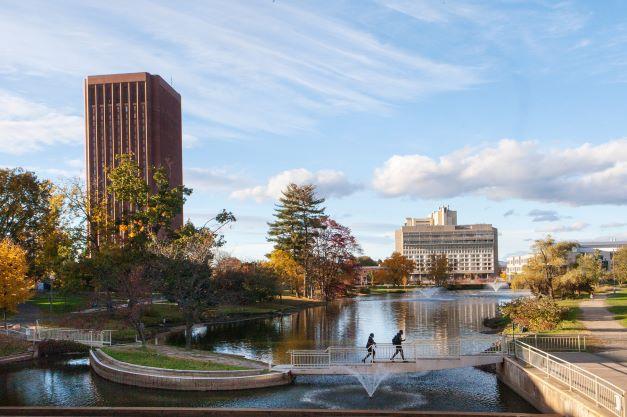 When the process first began in 2004, there was no network. Cameras were analogue and recorded locally at the building where the devices were located. As networking caught up, Meade said, campus connectivity was built to support networking on personal computers and desktops.

“We originally built our system in an architecture that wasn’t reliant on an IT network that may or may not be there or backed up and since then we’ve maintained the distributed/decentralised model of recording,” Meade said.

“With the distributed model,” said Peter Ferguson, Senior Electronics Security Engineer, Electronic Security Systems (ESS), A&F Information Technology (AFIT), UMass, “if there’s a power failure or network equipment goes down, as long as it’s connected to the UPS it stays up and is operational. It’s not reliant on things outside of our control to be able to communicate, so we can maintain video recording in the event of a network or power failure.”

“One of the other aspects that really compelled us to select Salient Systems was that we had a desire to substantiate and verify door alarms in the C•CURE by Software House access control event management system by Tyco system,” added Meade.

“The ability to have a ‘marriage’ between a door alarm and associated video was big for us,” he continued. “For example, to be able to ascertain why an alert was occurring without having to deploy resources to drive across campus to visually assess the situation was huge. An example is a residence hall located near a bus stop. When it’s cold or rainy, the door will go in and out of alarm frequently. What we’ve come to learn from reviewing the video is that people are standing in the doorway, to stay warm and dry, and repeatedly opening the door to see if the bus is coming. That was one of those situations where the video saved us time and resources in an investigation when it was actually a non-alarm.”

With some 51 resident halls and 225 buildings, the campus at Amherst continues to grow. Anything built, acquired or renovated in the last 10 years has access control and video. The university maintains a decentralized video surveillance recording model but intrusion and video monitoring is centralized and operated by UMPD.

Currently, a combination of C•CURE and Salient CompleteView VMS platforms is working together in an integrated fashion. Alarms from the access control and door systems in the residence halls are enunciated in the Residential Life Operation Center where video pops up on desktops with the associated alarm and alerts recorded locally with no active monitoring.

Video exceptions and alarms are viewed, monitored and managed through the Salient platform at the police department, where operators have the CompleteView client on desktops. Dynamic Resolution Scaling with CompleteView lets users save bandwidth in the event they need to pull live and recorded video and transfer it to other locations for investigation.

“You’re not taxing your network by centralizing everything,” said Jay Mele, Director of Sales, Salient Systems. “When Jim or the police department does a forensic search or pulls live video, they can take advantage of the scaling of the video over the network to accomplish that review without networking and bandwidth constraints.”

The university currently has some 1,685 video cameras deployed on campus, with newer installations deploying IP Axis cameras and some locations retaining older analogue cameras until upgraded. Other surveillance locations include the Mullins Center 10,000-seat arena and an 18,000- seat football stadium. In addition to onsite locations, UMass has satellite locations in Hadley, Mass., as well as an Aviation Research and Training Center in Chicopee, with two new building purchases underway.

UMass is looking to the future with its flexible technology footprint: as new Salient recording systems come on line they are designed to handle both analogue cameras as well as accommodate newer IP devices.

“The university is designing the system in a manner in which they can easily scale up and add cameras over time without having to incur the cost of a second or third recording server at that individual site,” Mele said.

Part of the university’s standard for camera deployment includes ease of use and being able to operate the system without an arduous learning curve for its many different users with various levels of IT and computer expertise. “We were able to provide UMass with a future-proofed migration path as they move from an analogue infrastructure to IP,” Maee concludes.

Webeye looks forward to more opportunities to meet in person

webeyeCMS could save you 40% a year in costs