Benchmark looks at 12 products and systems of interest for integrators and end users who are looking to implement smart solutions which make use of intelligent video analytics.

Modern smart solutions are effective and robust data collection and management systems, which can automate actions and status changes in response to exceptions or incidents of various types. These vary from an intruder being detected in a secure area, through a range of business scenarios such as deliveries arriving or health and safety violations, to customer-facing tasks such as welcoming visitors or broadcasting marketing messages. Often such solutions use triggers, and video analytics is a flexible and cost-effective way of creating actionable notifications. 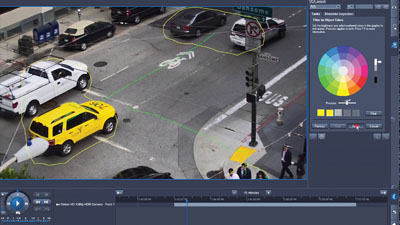 IVA includes more robust detection, managing changes in lighting or harsh environmental conditions. Analytics rules include all those supplied with EVA, along with tracking of ships, object counting using a virtual line or within an area, occupancy levels, motion and speed in crowds, wrong-way flow, and facial detection.

With both EVA and IVA, the analytics engines record the metadata, and as a result the data can be used to create advanced searches and filtering, whether an event has been configured into the video analytics or not. If there is no need to visually verify alerts, Bosch edge devices can be configured to only stream and record the metadata.

By recording the metadata alongside the video stream, the Bosch video analytics ensure a smarter approach can be taken to video management, including forensic search functionalities. 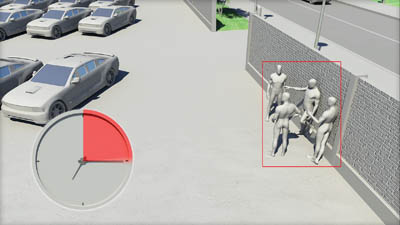 IPS offers a wide range of different edge- or server-based video analytics modules via the IPS AnalyticsManager platform. The IPS Loitering Detection analytics rule is ideal for effective detection of people remaining in a protected area for a prescribed period of time.

The module detects if a person or group of people remain in a certain area or in a specified position for a time that is defined by the user. Differing time windows can be allocated to individual zones. Once an alarm zone has been created and an individual dwell time set, an alarm signal will be generated as soon as the time limit is exceeded.

The IPS Loitering Detection module is flexible and can be deployed in indoor and outdoor applications. It provides perimeter, site and intrusion protection of sensitive areas by reliably monitoring open areas, fences, train stations, industrial plants and buildings. A number of prisons throughout Europe also rely on the IPS solution.

As well as offering a wide range of security benefits, loitering detection can also be deployed for a number of other reasons including health and safety and site management.

IPS video analytics include a GUI which allows intuitive setting of the individual analytics modules. 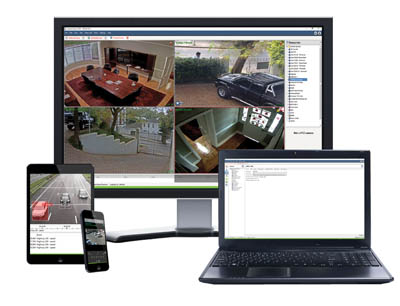 CathexisVision VMS includes a wide range of video analytics, and these have further been supplemented with AI-based object recognition. This allows the software to accurately detect if a scene, or incident, includes a person, a vehicle or an animal.

CathexisVision makes use of Rules to assess site conditions and implement bespoke actions. Rules can be very simple (such as if a virtual line is crossed, record video from a linked camera in real-time for 30 seconds) or significantly more complex, using a wide range of status information and data from the site.

Accurate object classification adds benefits to such a solution, as the Rule can require a specific object – a person or vehicle – to cross a virtual line, for example. If the requirement is to log people passing into a defined area, an animal doing so won’t generate an action, even if it is within the expected size parameters.

Where users are relying on their investment in smart technology to deliver real benefits, the use of CathexisVision, with its combination of advanced intelligent video analytics and the object classification feature, can create efficiencies and deliver a better level of information when decisions are made.

AI-Intrusion is an alarm-based video analytics module from the AI-Security range. It identifies intrusions into sterile zones and the crossing of virtual lines. The analytics module can either be run on a system server or can be implemented at the edge through compatible devices from either Hanwha Techwin or Axis Communications.

The AI-Intrusion PRO version supports traditional intrusion detection features. Users are able to define an unlimited number of crossing lines, allowing more complex scenarios to be detected with ease. With multiple lines it is possible to ensure a trigger is only generated if a valid target (for example a person of vehicle) crosses a sequence of virtual lines rather than just a single line.

This allows the generation of logical triggers, similar in concept to the traditional double-knock approach, increasing the reliability of intrusion detection as well as offering increased flexibility for business intelligence or automation triggering.

When the AI Appliance is connected to an appliance or server hardware running the Avigilon Control Center (ACC) VMS software, integrators and end users can leverage legacy cameras to create and implement powerful video surveillance solutions making use of AI-driven features. These include automatic alerts if critical events occur, along with the ability to search for, and locate, people or vehicles of interest across an entire site.

Available in two variants, the AI Appliance is capable of supporting either 30 or 60 two megapixel video streams in the same 2U form factor. As a result, the appliance can integrate into existing installations and scale to meet system requirements. The AI Appliance is supplied pre-configured and ready to run out of the box.

Avigilon Appearance Search video analytics technology is a sophisticated deep learning AI search engine for video. It sorts through hours of video to quickly locate a specific person or vehicle of interest across an entire site or multiple sites.

While investigating critical events, time is of the essence, and security operators are often tasked with finding footage of suspects, with the challenge of not only identifying when the incident took place, but of also finding relevant footage of a target before and after the event to help in an investigation.

Operators can initiate a search for a person by selecting certain physical descriptions, including clothing colour and gender, to find a person of interest. Appearance Search ‘learns’ about the target, highlighting other instances.

MxActivitySensor AI offers intelligent video motion detection. It is an integral part of the firmware for Mobotix M73 devices and is a software-based motion analysis tool with applied discriminations for detecting movement of people and objects in the image area. The selected area can either be the full image or a custom-defined area of interest.

MxActivitySensor AI delivers consistently reliable results, even in applications with varying lighting and weather conditions. The camera distinguishes between alarm triggering movements of vehicles, persons or objects, while rejecting nuisance movements which are irrelevant to the system, such as changing lighting conditions, moving trees or heavy precipitation.

The differentiation of objects according to type (such as defining differences between humans and cars, or humans or animals) is achieved due to the use of filters which are based on deep learning and artificial intelligence.

The camera is able to distinguish between movements of vehicles, people or objects that trigger an alarm, and can filter results based upon directional information, as well as applying discriminations based upon the object classification.

The first stage is to import video onto the PC which is running the application. This can be done in a number of ways, and the application supports standard video formats.

All faces in the video clip are redacted as standard. The operator then simply identifies the target individual, and the redaction is removed for that specific person.

The final video can be edited to ensure it is as required, and the final step is to export the video file.

Audio classication is different to audio detection which generates alarms based on audio intensity. When the camera classifies a sound, it compares the audio data with a source database which contains signatures of screams, gunshots, explosions and breaking glass. The camera extracts information about the characteristics of the audio source and calculates the cause based on the pre-defined data. Once it has assessed the audio source and defined a classification, it generates an event if required.

VCAbridge is a standalone analytics-enabled ‘black box’ which can be added to a surveillance system to enable the rapid and seamless integration of VCA Technology’s advanced video analytics engine to a wide range of third party devices such as NVRs, VMS-enabled servers and PSIM systems.

The bridge handles video from a range of sources, allowing flexibility with regard to legacy systems. It allows previously passive systems to have smart functionalities added simply by connecting the appliance. Based on HTML5, it is possible to configure the box to suit a range of bespoke needs, both for security and business intelligence. 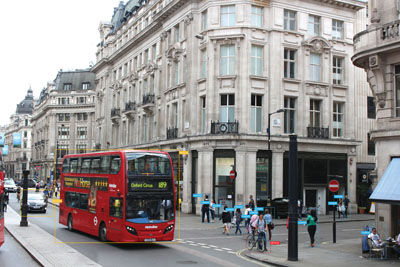 The full toolkit of high accuracy Edge VA functionality includes line cross, loitering and object detection, as well as other features such as audio detection, active-tampering, trip zones and more.

The same features are delivered with the new HD bullet camera range, which includes models with built-in heaters, IR and a PIR sensor.

VISuite 11 uses a patented Scenario-Based Rule Engine (SBRE), a flexible tool which allows users and integrators to precisely define behaviours of interest as they unfold in the dynamic and complex environments of real-world businesses and organisations.

The Rule Engine makes use of a conceptual description of activities as explained by a human operator. It allows for multiple video analytics and AI-managed events to contribute to the generation of an alarm trigger, thus creating the ability to analyse and combine inputs from multiple sensors to form a robust and cresdible alarm condition.

Ipsotek’s SBRE can differentiate between complex scenarios such as a vehicle stopping opposite a sensitive building, with the driver leaving the vehicle and walking away, or a taxi stopping at the same location to let a passenger alight.

The SBRE allows events from different sensors to be merged, enabling the system to benefit from multimodal detection, such as combining facial recognition with tracking and access control to differentiate between a guard backtracking on arrival gates and a person attempting to breach airport security.

AXIS Motion Guard is a video motion detection application that detects and triggers alarms when objects, such as peoplen or vehicles, move within predefined areas in a camera’s field of view. It is ideal for low-traffic areas.

AXIS Motion Guard can be used by indoor and outdoor Axis network video products with firmware 7.x and higher.

AXIS Motion Guard integrates with a camera’s event management functions so users can decide how the system automatically responds to detected movement. Responses can include live video and email alerts to users, recording video only on alerts, switching audio devices or lights on alarm, etc..

The small object filter can be refined using perspective configuration to allow the application to associate an object’s image size at different distances from the camera with the actual size of that object. As a result, AXIS Motion Guard can alert operators to the presence of a vehicle further away, while ignoring an animal at close range.

Video analytics uptake to rise 22% by...