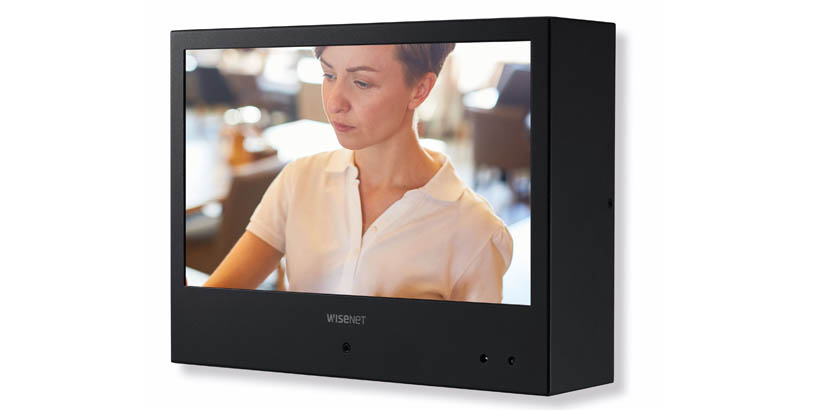 A range of Wisenet Public View Monitors (PVMs) equipped with a built-in SSL connected two-megapixel camera has been introduced to help retailers deter fraudsters and shoplifters. Offering a choice of 10, 27 and 32 inch monitors, the three new PVMs are designed to be located at store entrances, shopping aisles, till points or self-checkout pay points.

With an SD/SDHC/SDXC slot which can support up to 512GB of data storage, the PVMs provide store management with the opportunity to display a slide show which can include supplier adverts, own-brand product promotions and special offers.

A default blinking ‘Recording in progress’ message is superimposed over the displayed graphics to let would-be thieves know they are being captured on camera, with operators having the option to customise the message and configure its size, colour, opaqueness and positioning on the monitor.

Supported by the Wisenet WAVE and SSM video management platforms, as well as Wisenet NVRs, the ONVIF conformant PVMs can be programmed so images captured by the cameras are either continuously recorded, or archived when triggered by built-in face or motion detection video analytics.

The face and motion detection feature can be configured to switch the display to live view, making people aware they are being monitored. The display reverts to the slide show after a specified number of seconds.

The PVMs, which can be integrated with tagging (EAS) systems to record images of people who might be leaving the store with stolen items, and also provide support for the AI-Masking, AI-Bio, AI-Face-Detect and AI-Occupancy video analytics applications developed by A.I. Tech.

The ultra-low light capabilities of the new PVMs, together with Wide Dynamic Range (WDR) technology performing at up to 150dB, enables the camera to capture clear, sharp images in strongly contrasting light conditions.

All three PVMs can be powered by 12V DC, with the Wisenet SMT-1030PV also offering the option to utilise Power over Ethernet (PoE+). A single cable of up to 100 mtres is all that is needed to provide both power to the SMT-1030PV and for network communications

‘With retailers increasingly relying on PVMs to play an important role within their strategic approach to loss prevention, Hanwha has designed its new models to make it quick and easy, as well as cost-effective, to deploy them across a large number of stores,’ stated Uri Guterman, Head of Product and Marketing for Hanwha Techwin Europe.

‘The PVMs eliminate the need for system integrators to install and connect a separate supporting camera. By building in an intuitive user interface,  it is extremely easy for busy store managers to take full advantage of the PVM’s functionality, including the ability to utilise the monitor for advertisement and signage using the slide show mode.’