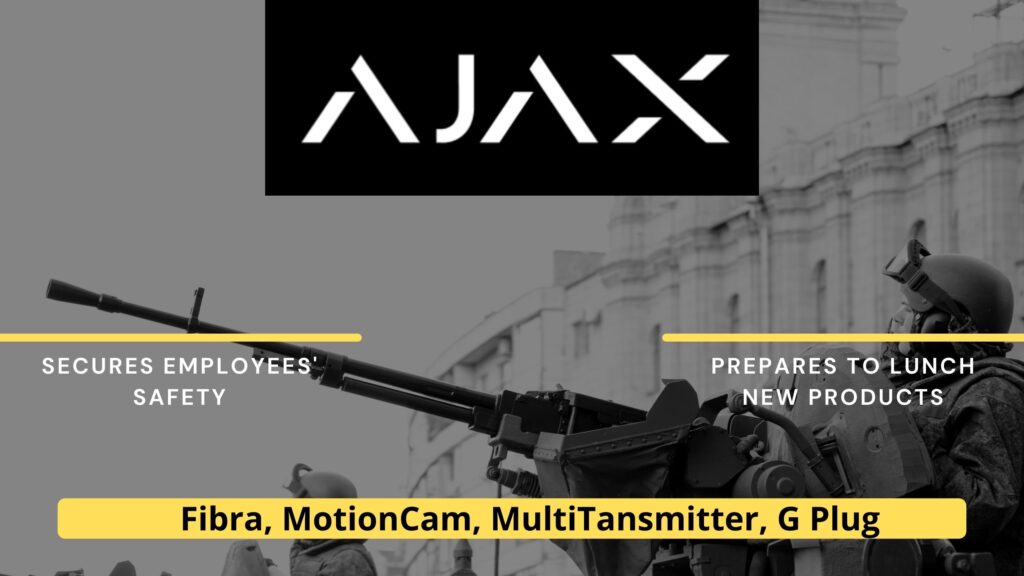 Since the outbreak of war between Russian and Ukraine, Ajax Systems has taken steps to ensure the safety of its employees , and the continuation of business and supplies to partners.

So far, Ajax Systems has relocated over 600 employees and their families to safe regions in Ukraine and Europe. The manufacturer also ensures that its own and partners’ businesses work as usual. Right now, the company is relocating the stocks of finished goods and relaunching its production facilities. The regular shipments to partners were renewed this week, on March 9.

Speaking of the existing systems, the Ajax server infrastructure function without interruption, so users and partners don’t have to worry about the stability of already installed systems. Ajax’s servers are geographically dispersed throughout Europe in Amazon data centres in Ireland and Germany. This is a proven, worldwide practice for large manufacturers and organisations.

The company also continues working towards launching new products. Ajax devices announced during the Special Event presentation will soon become available according to schedule. Here is the list of the company’s upcoming novelties and innovations.

The new Fibra product line of wired devices embodies all the advantages of the wireless Jeweller products. A line of 2,000 meters can even cover a multi-floor building, while the power consumption is 100 times lower than the industry average for digital wired detectors. Like in Jeweller devices, data transmission within Fibra is encrypted, the devices are equipped with anti-sabotage technologies, the system is fast to install and allows remote control via smartphone.

Initially, the camera of the MotionCam detector was only activated in case of an alarm. This limited functionality dismissed the privacy issue. However, the request for the photo-on-demand feature remained on the agenda of the market. To provide Ajax users with more photo verification options, the company’s engineers had to re-invent their detectors while taking care of the privacy issue. Eventually, both versions will be available on the market with and without photo-on-demand support.

The MultiTransmitter integration module will support detector connections with two and three resistors. This way, it will distinguish more types of events from the connected wired detectors. This will make renovation more flexible with multi-zone alarms in commercial properties and increase the number of compatible sensors.

The UK version of the device will have a functional button allowing you to control the socket without the app or Button. Also, the settings will become more flexible: a configurable over-current threshold, fine-tuning of brightness and resetting of the electric power meter. The new Ajax socket will have an unprecedented range of over-the-air communication: up to 7 times longer than competitors in the smart home segment. The maximum radius is 1,100 meters of two-way encrypted connection, which does not depend on Wi-Fi.